Tiggywinkles is the world's busiest wildlife hospital, treating over 10,000 sick and injured animals every year. Between January and March 2015, we committed to build a house out of packaging for Hector the Hedgehog - a cuddly toy version of the real thing. This wasn't just any house though; as we raised money for Tiggywinkles Wildlife Hospital, we kept adding to Hector's house until it became a mansion!

We raised a huge £351.46, and we'd like to say a big thank you to all our kind donors and everyone who's followed our campaign. We hit five targets giving Hector a house, sky dish, garage, garage extension and west wing extension made entirely out of RAJA packaging, including several types of cardboard boxes and our tissue paper range. We also donated £220 worth of stationery and packaging directly to Tiggywinkles to help them out.

For those of you wondering what kind of house Hector the cuddly toy is now living in, you will be pleased to know that we had so much fun building the garage and sky dish, that we decided to build the trees, car, swimming pool, tennis court and plane anyway!

Hector can now take day trips in his cardboard plane or cruise the roads in his cardboard convertible. We hope you'll continue to support Tiggywinkles Wildlife Hospital and keep an eye out for our next charity campaign.

Helping Hector and his friends 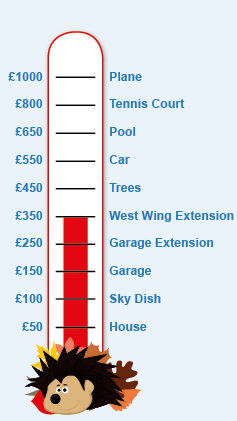 Located in Haddenham, near Aylesbury and just an hour's drive down the road from Rajapack's UK head office, Tiggywinkles cares for sick and injured animals such as hedgehogs, badgers, deer, wild birds, foxes and reptiles. When we found out that they need cardboard boxes to make hedgehog houses, we knew we could help them.

As the hospital receives no national funding, they rely heavily on the generosity of the public to provide the best in care free of charge. Your kind donation will ensure that they continue their important work giving wildlife a second chance.