From tech giant IBM appointing its first female CEO in 2011 to the Academy of Motion Picture Arts and Sciences increasing the share of women on the board, there’s no doubt women are breaking the glass ceiling in the world of business. In fact, the RAJA Group itself was founded as a two-woman company as far back as 1954. But as we move into a new decade, how much further do we have to go before gender equality in the workplace is truly equal?

In 2017, we challenged the notion of gender bias by unpacking the new female industrialists and speaking to a number of women making their mark in traditionally male-dominated industries. This International Women’s Day, we’re going one step further and taking a look at how far women have come in the fight for leadership positions and what work still needs to be done in 2020 and beyond.

Women in leadership: the current situation

In 2018, McKinsey’s Delivering through Diversity report showed the statistical significance of diversity in leadership. When it came to women in executive positions, the study confirmed that companies in the top quartile for gender diversity on their executive teams were 21% more likely to have above-average profitability than companies in the fourth quartile.[1]

Yet according to our research, businesses are still failing to utilise the benefits that women can bring to leadership roles. The Office for National Statistics’ annual population survey shows that in 2010, only 34% of Managerial, Directorial or Senior Official positions within the UK were occupied by women. A decade on (with research up to 2018), this has only increased by a disappointing 1 percentage point to 35%.

This is particularly shocking when stats show us that over 50% of the UK population is comprised of women, making it even more conclusive that the ratio of women to men in leadership roles is not representative of the society that we live in.

A breakdown of women in leadership by sectors 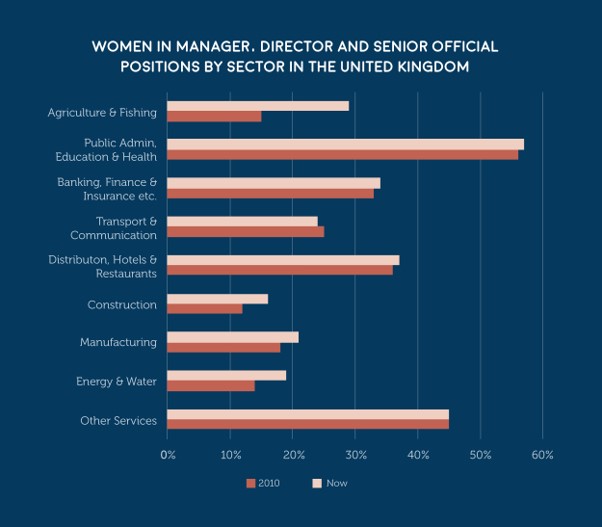 By looking into the employment sectors stated by the ONS within the UK, we were able to dissect the data in more detail through the following categories: Agriculture and Fishing, Energy and Water, Manufacturing, Construction, Distribution, Hotels & Restaurants; Transport & Communication; Banking, Finance & Insurance etc.; and Public Admin, Education & Health.

The data shows that in half of the given sectors, less than a quarter of leaders are female. The sectors with the poorest performance in terms of female leadership are Construction (16% of leaders are women), Energy & Water (19%), Manufacturing (22%) and Transportation & Communication (24%). In addition, Banking, Finance & Insurance has historically been known for its Wolf of Wall Street-esque setting. And, although this 80’s depiction is a far cry from what it is today, it is troubling to see that still, only 34% of leaders in the sector are women. In fact, the only sector where more women currently hold these roles is within Public Admin, Education & Health at 57%.

So, what can we do next?

Despite initiatives to promote equality in the workplace being championed across many businesses in recent times, there is still work to be done. In fact, a recent review of FTSE leaders shows results that are not only disheartening but shocking, too. Within the FTSE 100, around two thirds of all available leadership roles are occupied by men and, as of 2019, only seven of those CEOs were female[2][3]

So, what can all companies – big and small – do to ensure that we are beating the bias and benefitting from women leadership in every workplace? Here are just three ways we can do this:

From striking for equal pay to securing classification as skilled workers, women have taken great strides in the fight for workplace equality. Yet sadly, there is still a perception that certain industries and roles are only suitable for men.

On Sunday 8th March 2020, we will be celebrating how far our society has come in terms of gender equality in the workplace, whilst also thinking about how we can continue to push for progress. To learn more, head over to our interviews with the inspirational women who are packing away stereotypes in corporate culture and showing value in male-dominated industries.

[Methodology: This research was conducted by analysing the Annual Population Workplace Analysis survey from The Office for National Statistics to work out the population of males vs females in Manager, Director and Senior Official positions within the UK. This uses their data ranging from 2010 to 2018.]