Ever wondered how they put the stretch into stretch film?

Following our April Fools InfusionWrap™ launch, we investigated how bubble wrap stays so strong under pressure yet is so easy to pop after use, and delved deeper into exactly how bubble wrap is made.

We had so much fun that we wanted to do the same, but for stretch film. The laws of physics suggest that a material becomes weaker when stretched, so how does stretch film manage to remain durable and strong even when stretched to around 500% its standard size?

It’s a product used in retail, shipping, deliveries, transport and now increasingly in airports, where people are shrink-wrapping their suitcases when they fly abroad to prevent damage or theft. Across all industries, shrink wrapping helps to prevent tears and damage to materials and keeps items secure in one place; it helps to protect products and save on space and material.

Getting ready to stretch

Stretch film is usually used to secure large or heavy loads on transit pallets. Like bubble wrap, the film stays durable and strong under pressure.

The resemblances between the two packaging products stem from a similar manufacturing process for both. 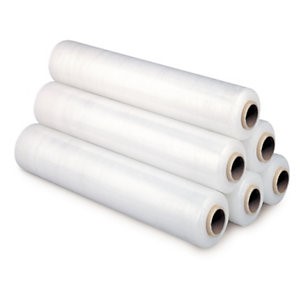 Both bubble wrap and stretch film are manufactured from polyethylene and involve a system of melting and cooling.  The difference between the two, and the reason why stretch film has stretch properties, is through the use of higher alpha-olefins, which are chemical compounds with a higher reactivity rate.

This chemical process gives slack to the material which means it can stretch, but interestingly also makes it puncture resistant. Some stretch film can stretch to around 500% of its normal size, although most packaging requires only 100-300% stretch.

The difference between stretch film and shrink wrap

On many occasions, stretch film is mistaken for shrink wrap because they can look very similar. However, apart from both being manufactured from plastic resin via the blown process, they aren’t similar at all.

The properties that make the shrink wrap ‘shrink’ are frozen into the plastic during manufacture and can only be activated by a heat source. When the right amount of heat is applied to the wrap it moves towards melting point which makes it contract and ‘shrink’.

Shrink wrap is made from low density polyethylene which doesn’t have the tear resistance or holding force that stretch film has.

There are two common process for turning polyethylene into stretch film, both resulting in quite different types of film:

The first method creates Blown stretch film, the more durable and high quality form. The longer cooling process of blown stretch film allows the bonds in the plastic to spread out more, making it more durable.  In this method, the polyethylene resin is heated until it melts and then pulled through an annular die. This puts pressure on the resin and turns it into a sheet.

The sheet is then cooled to form what we would recognize as stretch film.

The second form of manufacture creates Cast stretch film which is not as high quality as blown, but is cheaper and quicker to manufacture. Because of the quicker cooling time, the chemical bonds spread into individual lines rather than evenly across the film.

It still goes through a similar process of melting resin being put through a die, but with this method the resin is passed through a slot die before it then moves over moving over cooling rollers, as opposed to being given the time to cool naturally at room temperature.

Time to wrap it up

Stretch film is an important part of any efficient packaging operation; its versatility and durability make it ideal for both large and heavy items, as well as small and awkward ones. Stretch film is ideal for protecting parts of products, keeping items clean from dust and dirt and for securing difficult shapes.

It can also be designed in different colours, which can help strengthen a business’ brand impact. Stretch film is a cost effective and simple way to package.

Rajapack’s own range of stretch film includes coloured film, dispensers, mini stretch film, cast film and blown film. If you want to know more about the different uses of stretch film for your warehouse or packaging operation, call us today on 0800 542 44 28.

All you need to know about shipping large items

The difference between plastic vs cardboard storage boxes

Helping your business go green: a guide to Recycling Symbols